“Oh my, what an emergency! You have a boring shower! Look that that plain shower curtain! So plain! So… uninteresting! You should replace it.”

That is what my inner interior designer would probably say if I saw a plain white shower curtain. Being a person who does not like something too serious, I would love to see some humor, some spunk, some colors into my things… shower curtains included! Here are some funny shower curtains to make your bathroom interesting. 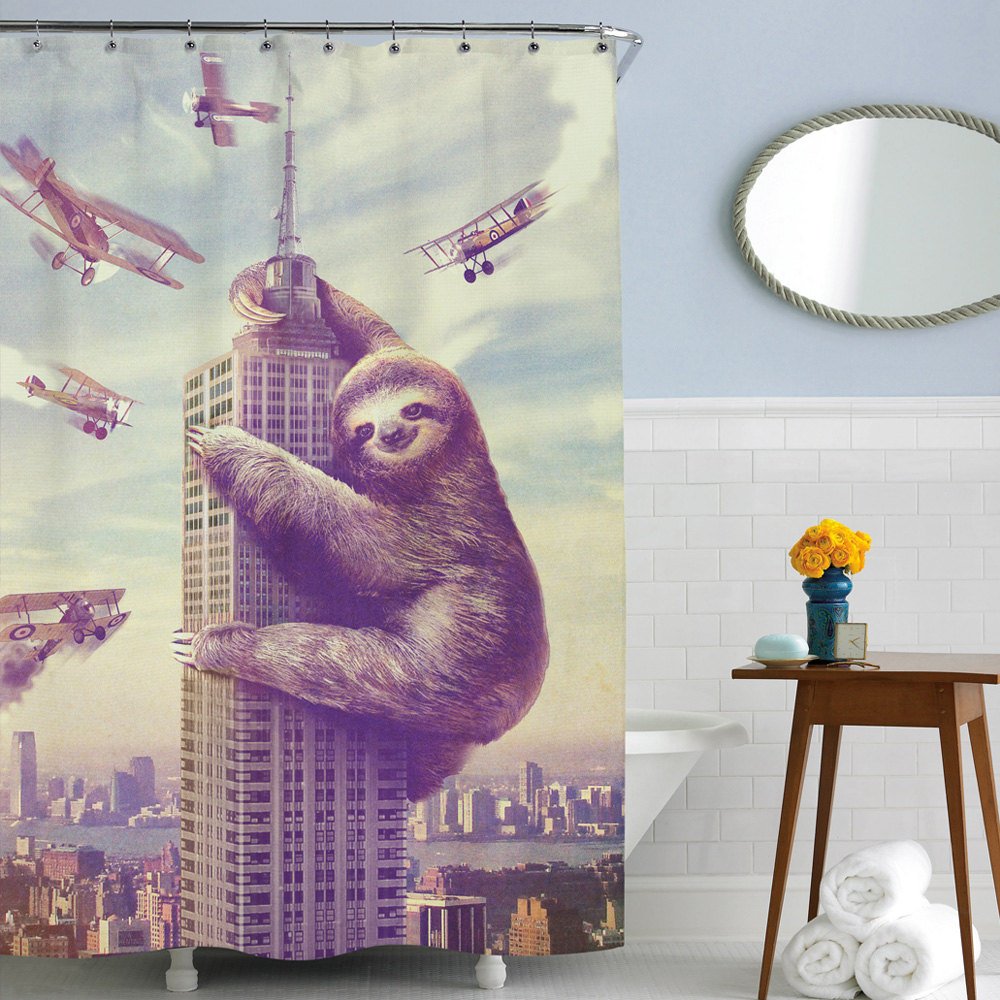 The Slotzilla is a parody of King Kong building scene parody. Which is confusing, because they should have just named it Sloth Kong. Anywho, this features a giant sloth climbing what looks like the Empire State Building. What makes the scene complete is the presence of retro-looking fighter planes. Just awesome and gives someone something cool to look at while they use the toilet. 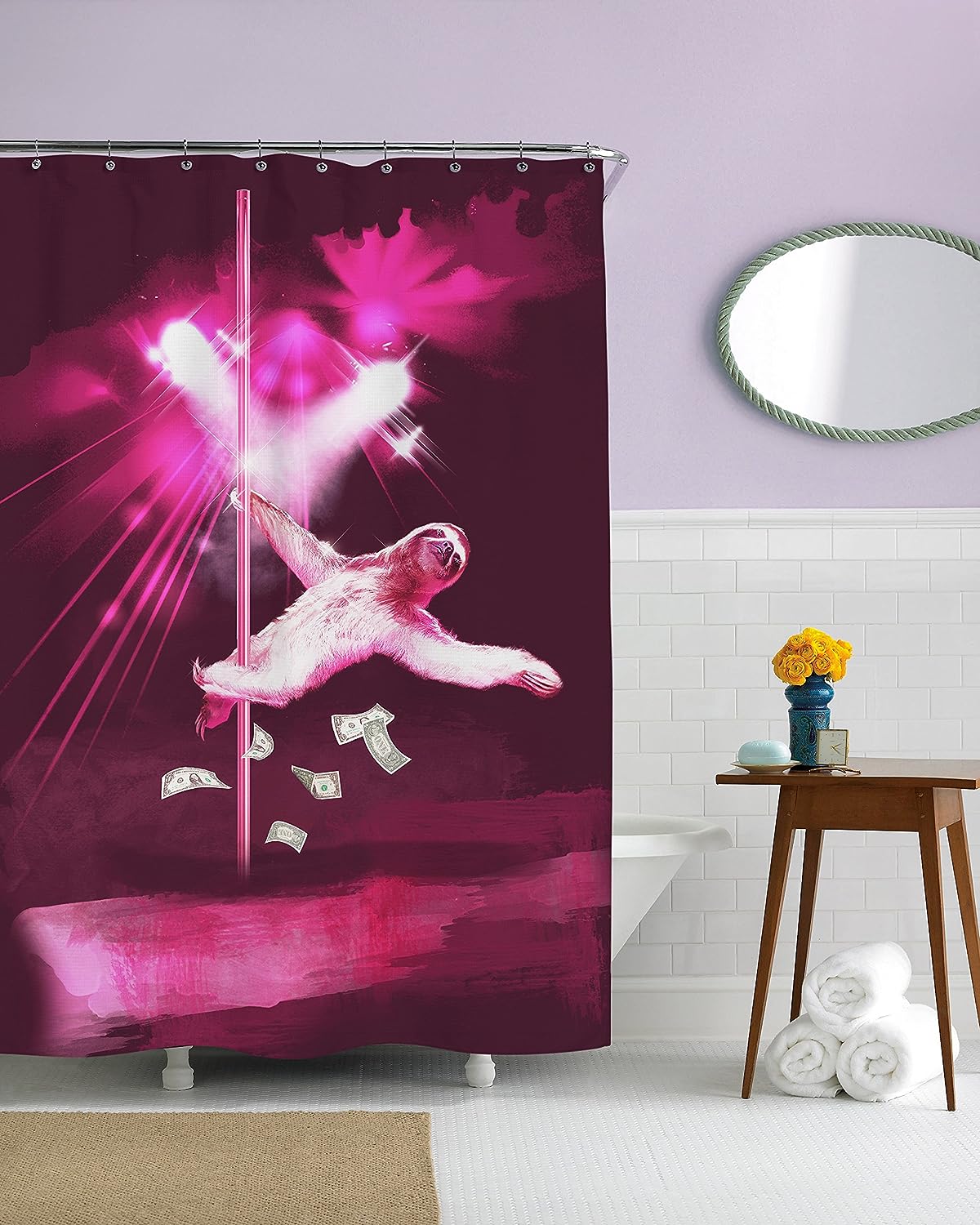 Oh my! Another sloth shower curtain! This time, our Slothzilla is small and is dancing on a pole, being showered with money. What a hard working, independent sloth that needs no man! She is probably doing this for to pay for her college tuition... or probably her baby. Anyway, our little sloth is fun to look at while she dances seductively for you while you take a shower. What a fun shower curtain!


Looking for More of these Funny Shower Curtains Featuring a Sloth?

Oh looky! More of our beautiful sloth on shower curtains! 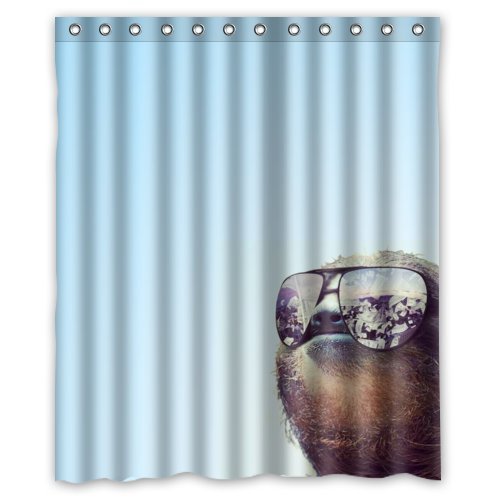 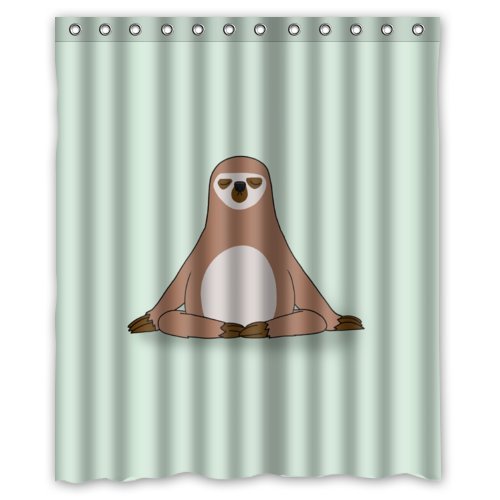 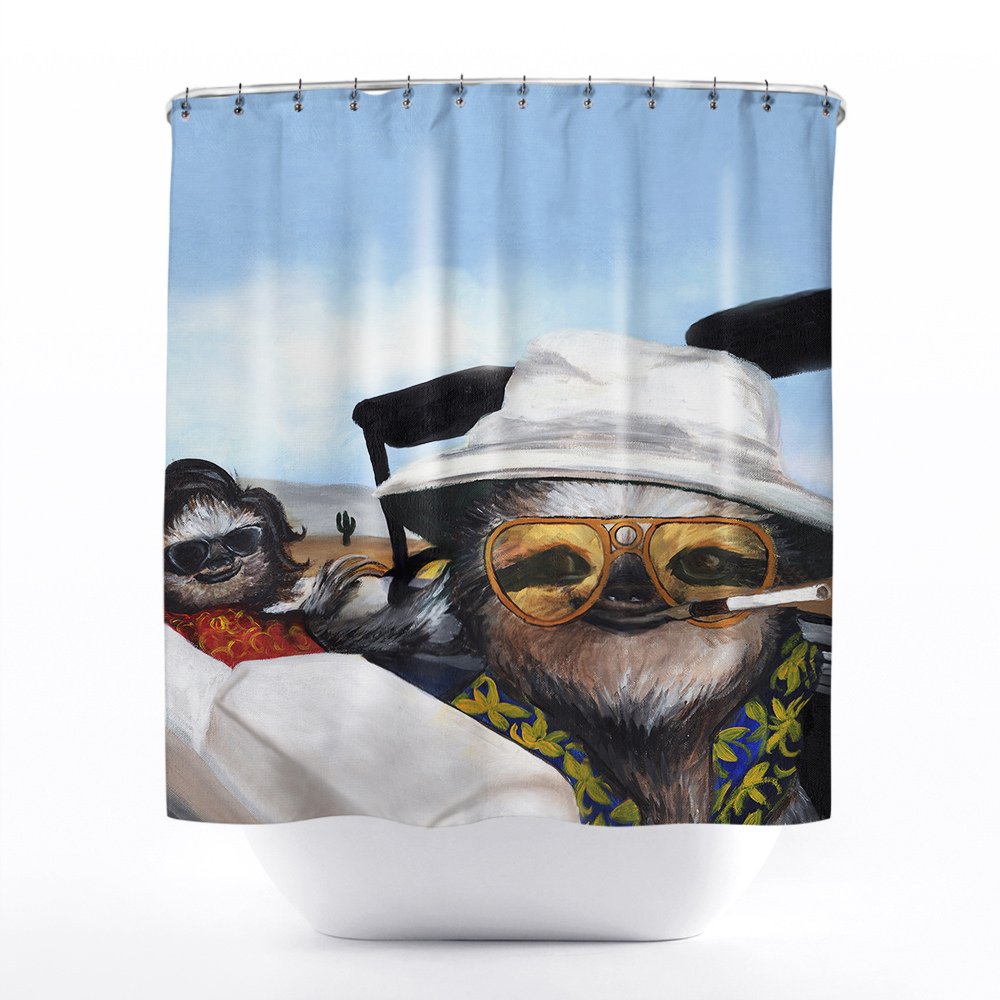 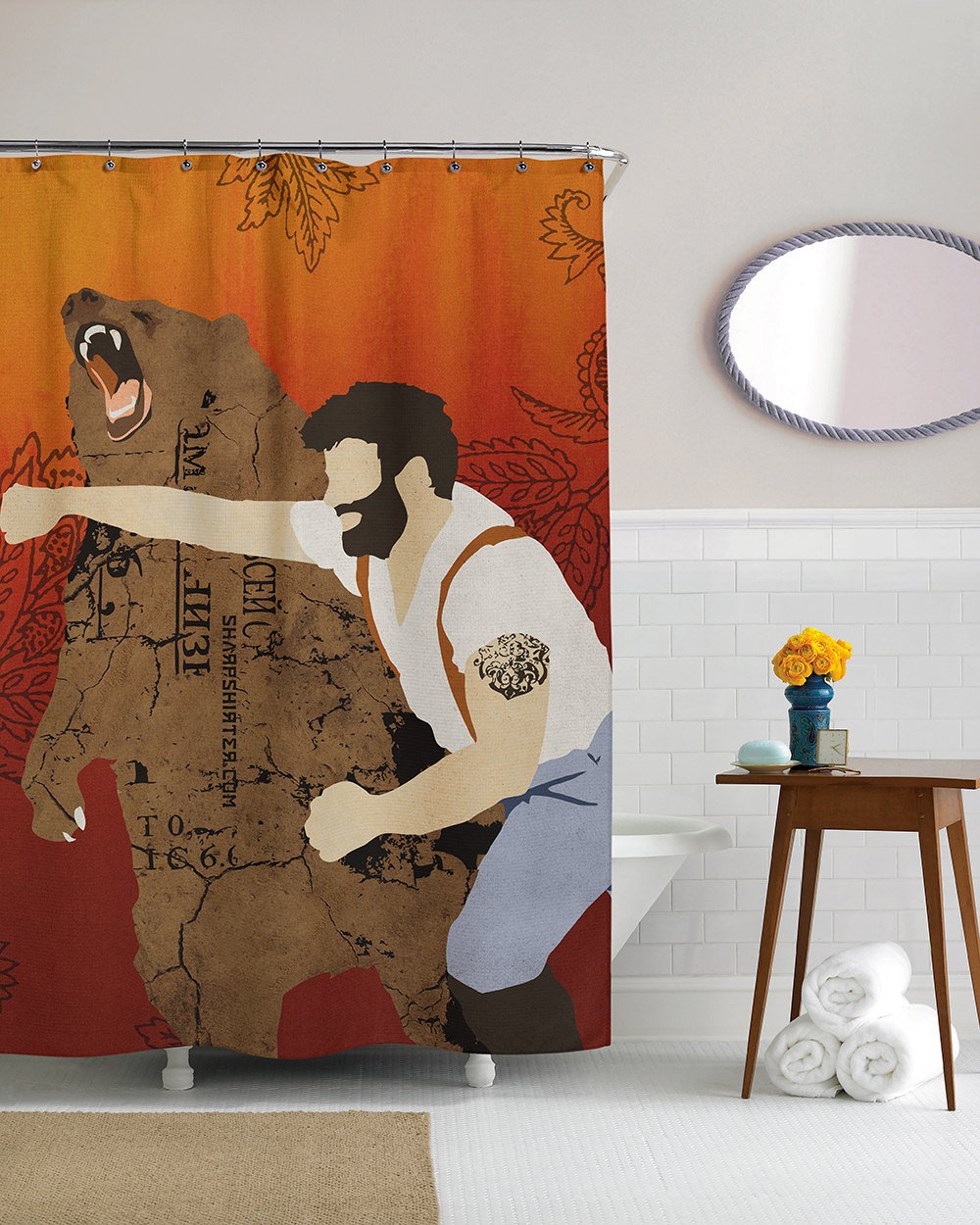 We all admire Chuck Norris. Even typing His Name is an honor. He can make anyone tremble. Even Satan himself fears the mighty Chuck. He can make lemons juice themselves. He also can punch a bear. Actually, He is not punching that bear...he is punching the air in front of the bear's face and it is the displaced air that hurts the bear. That's how bad-ass Chuck Norris is. If you want to bask on Chuck's magnificence then you should get this fun shower curtain. This is the shower curtain of the gods. 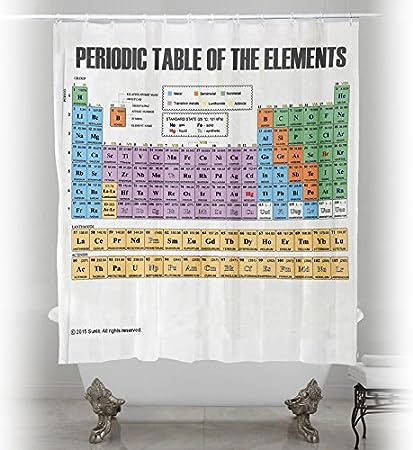 Are you a chemistry nerd? Or a mad scientist, perhaps? Maybe both? Then you should show your love for the elements by getting one of these funny shower curtains. The Periodic Table of Elements shower curtain is an accurate table of elements, blown up and printed on a shower curtain. Aside from being an obviously great gift for scientists, this is perfect for those who are not afraid to show a bit of nerd in their bathroom, or for those who like The Big Bang Theory, because Sheldon owns one! 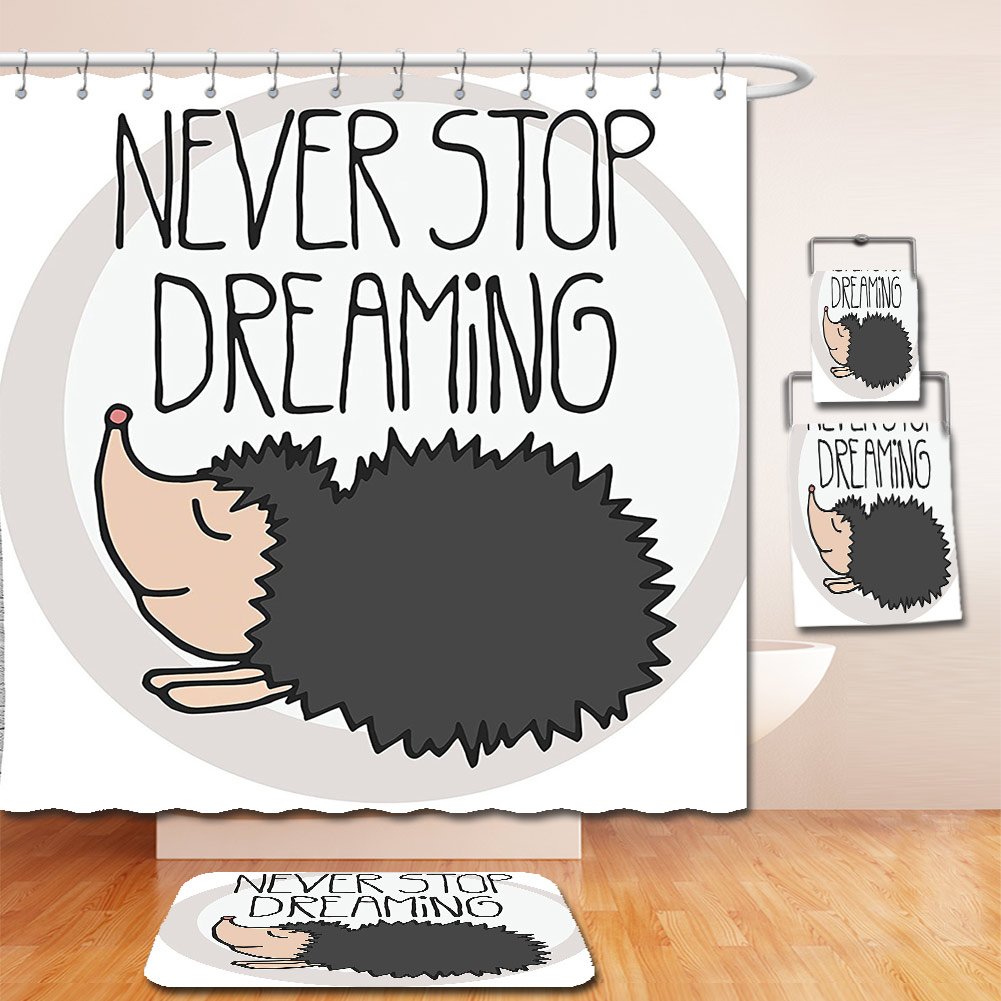 What is your life long dream? Become a world-famous restaurateur, perhaps? Or become a successful trader? Win a Nobel Piece Prize? Mine is simple: see a giraffe ride a shark while charging into space. Now it is a dream come true with this "Never Stop Dreaming" shower curtain. It shows exactly what i want to see: a giraffe, holding a sword, riding a killer shark while charging into space. Perfectly colorful shower curtain. Now I can die happy. 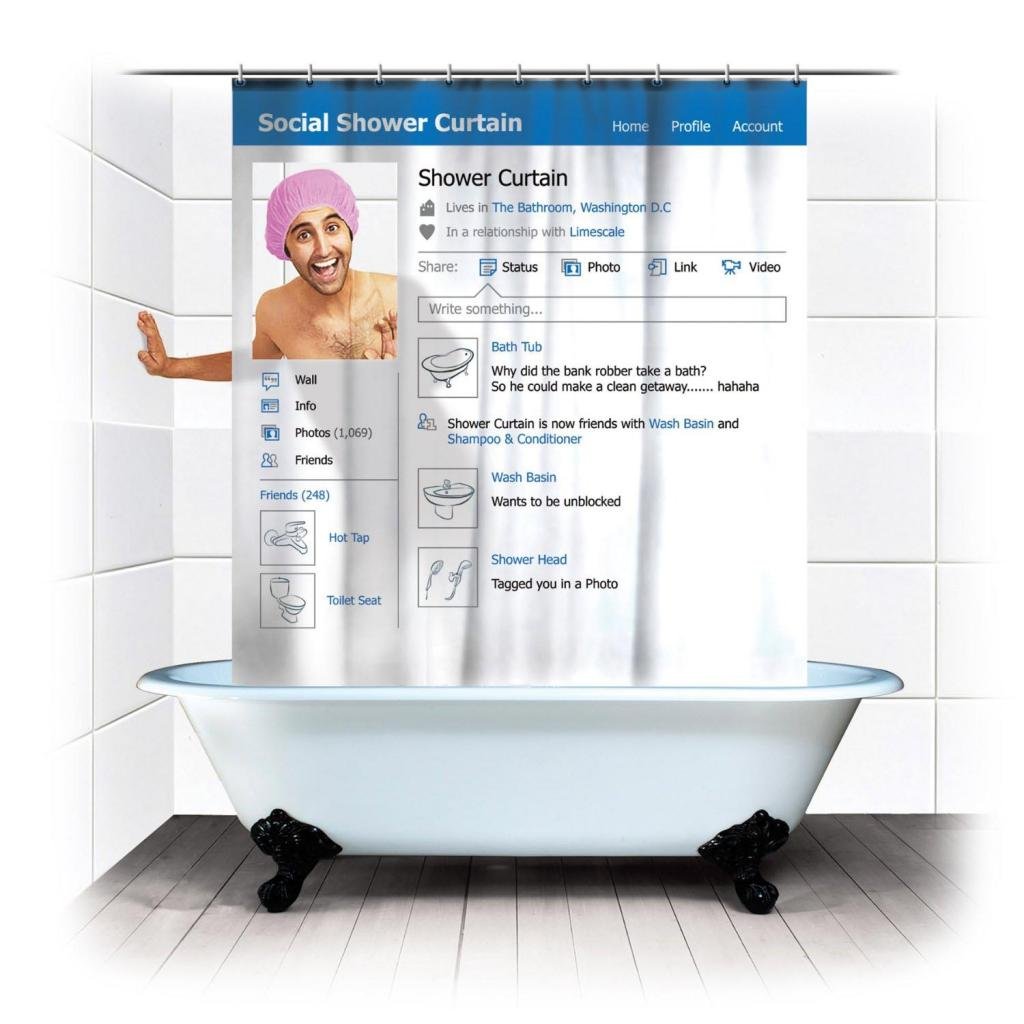 Are you a Facebook addict? Got someone who would kill for some Facebook time? Here is a funny shower curtain just for them! The Facebook shower curtain looks just like the old Facebook profile, with a transparent part where the profile picture would have been. When you jump into the shower and close it, your head will show outside, making it look like a complete social media profile. Awesome! 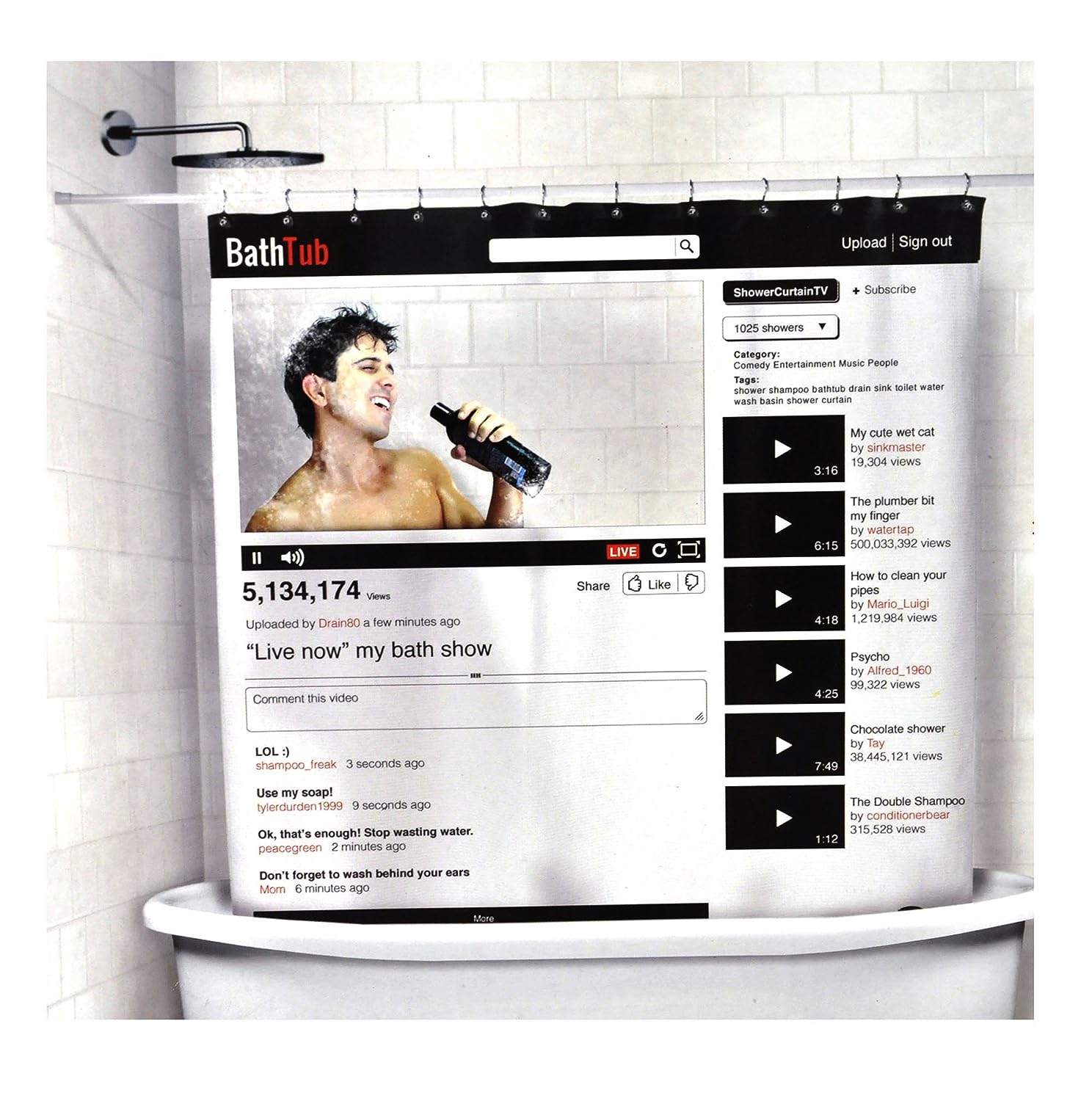 Another funny shower curtain any social media junkie should have is this Youtube-like shower curtain. When you jump into your bath and close the curtains, you will notice that the video part is transparent, making it look like someone is watching a Youtube video, featuring you! A big bonus if you are singing in the bath, just like the guy on the picture! This is one cool shower curtain! Word of warning, though: this is not for tall ladies. 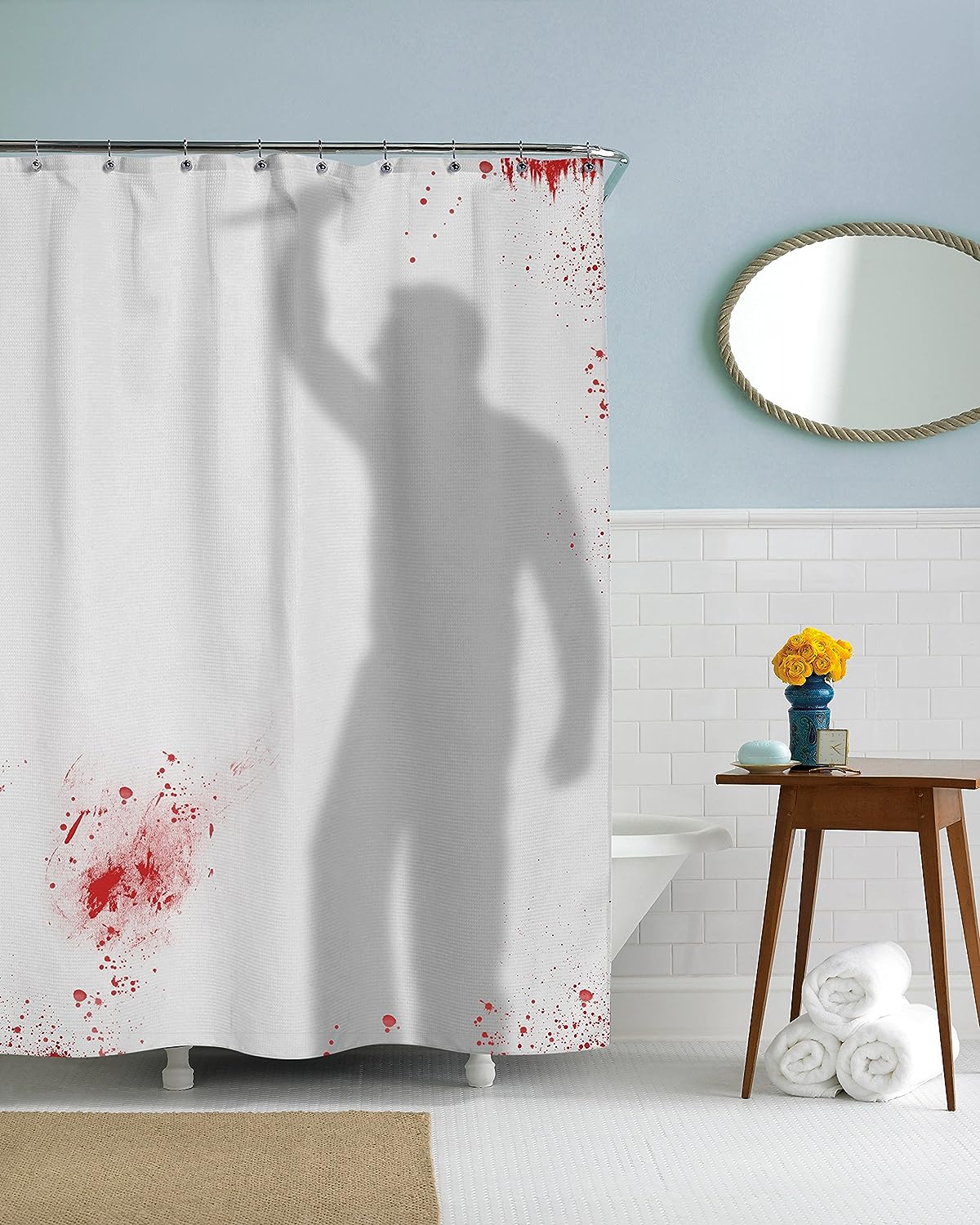 the cliche serial killer kills someone on the shower. You can now have one (a very harmless one) in your bath, thanks to this shower curtain.

This shower curtain has a silhouette of a killer and some blood spatters in it. This is perfect for a film student's bathroom or just for Halloween. What a cool shower curtain!

Oh, did you know that the first ever scene like this was from Psycho? Here is the scene:

Got someone who is a horror movie connoisseur? Here are some more similar shower curtains that follow the "shower murder" theme: 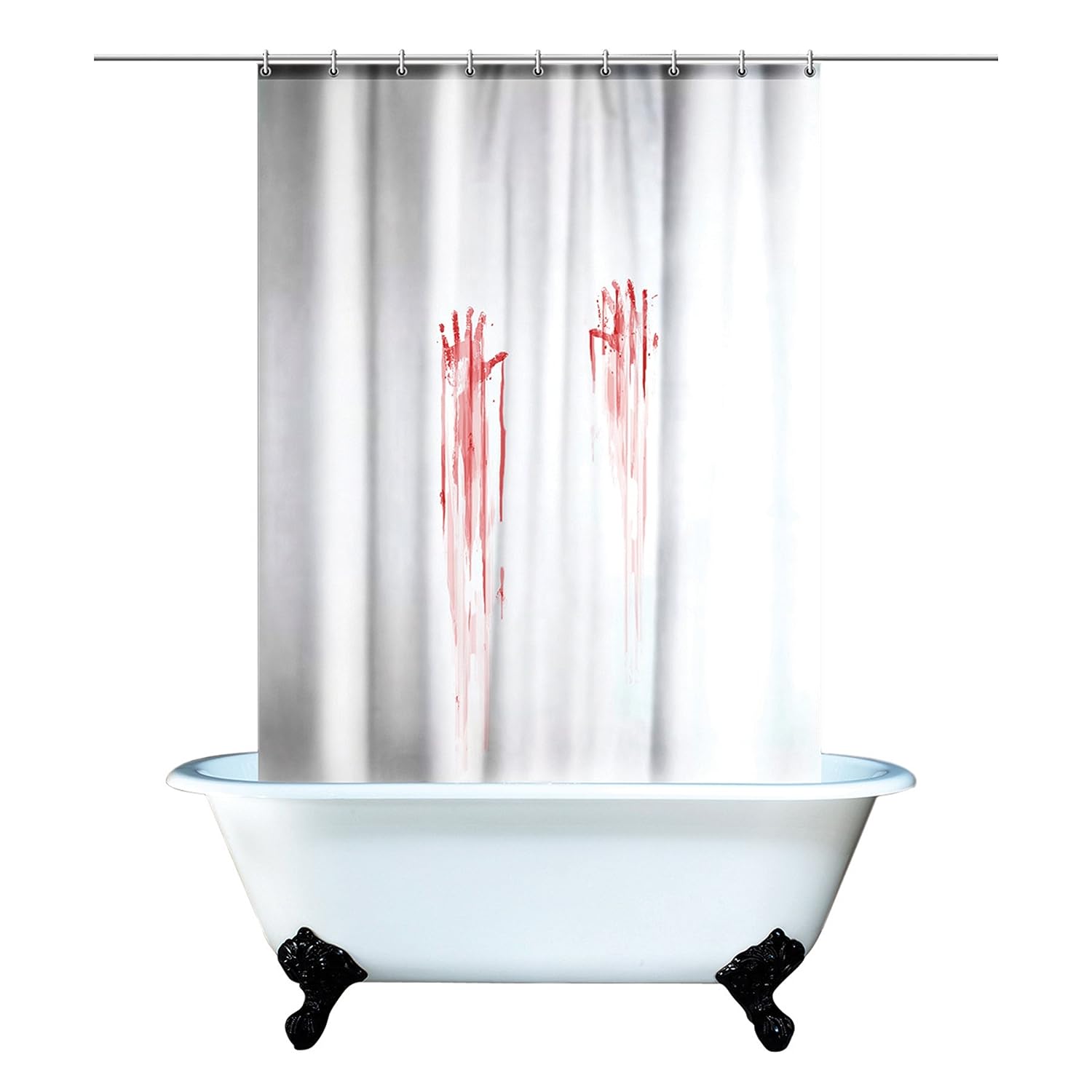 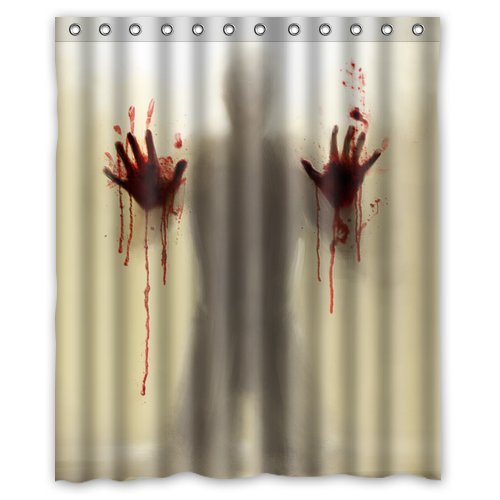 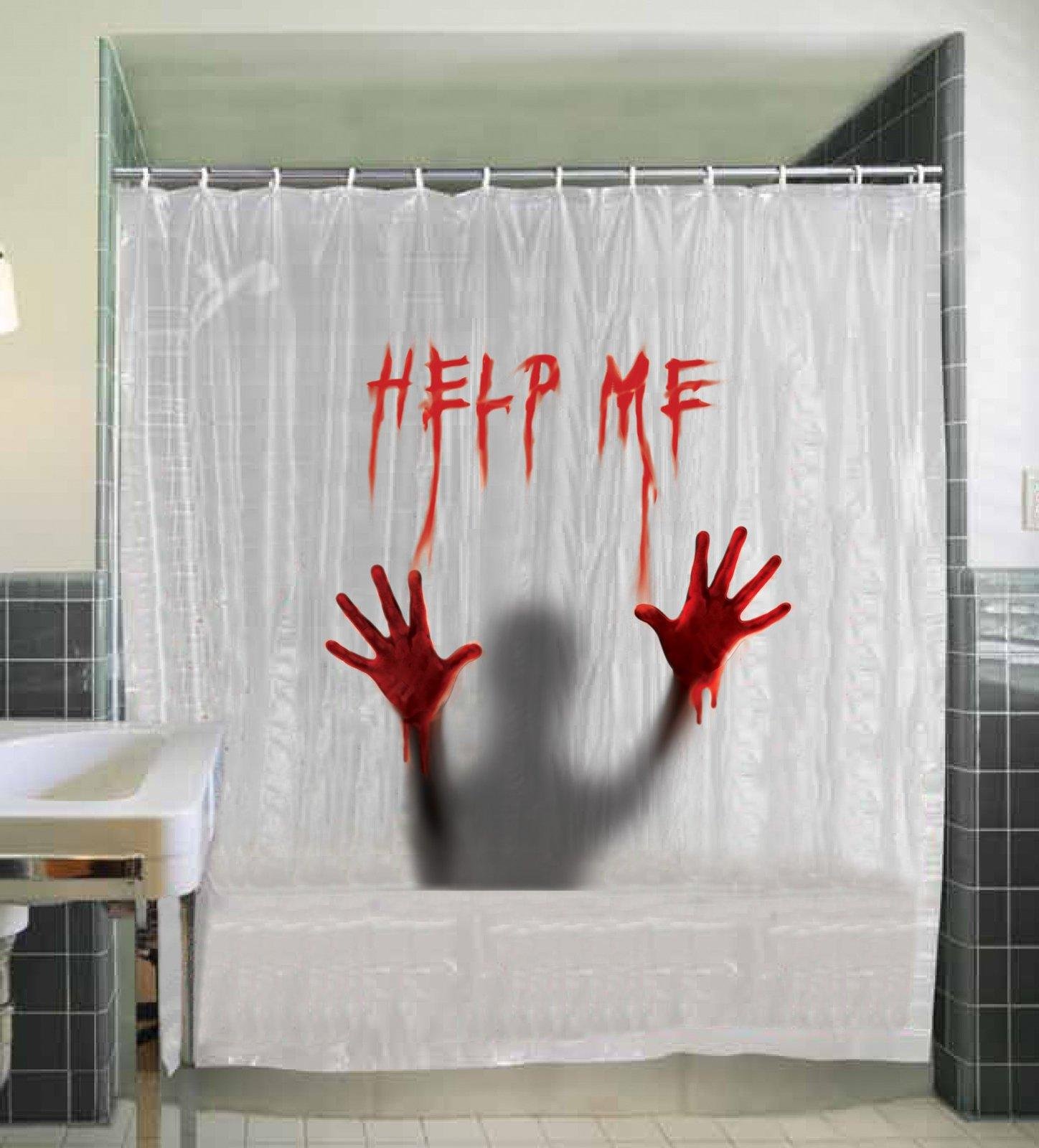 Looking for More Cool Gift Ideas for a Nerd?

Aside from these funny shower curtains? Here are some: