As a video gamer, I know that sitting comfortably is essential for a nice video gaming experience. And what better way to do that than to rest your butt or tummy on a few video game pillows!

Well, here are ten pillows inspired by video games for you to own and sit at. You can also use these for sleeping and resting your feet on. Whatever you like, actually. As long as you are comfortable while you blow up a settlement, save Hyrule or Fus-Ro-Dah another bandit off the cliff.

Photo above courtesy of Radly J. Phoenix, from Flickr.com

Oh hey there, Tetris blocks! you can sit or hug these soft, colorful pillows while holding a controller and looking at the TV. They are so perfect, they were featured in Gizmodo.

Any geek gamer will think a bunch of colorful Tetris blocks on a bed or a couch is cool. Some might even be tempted to build them to form horizontal lines! Do not worry, your gaming pillows will not disappear. :)

Cue in the Tetris theme song:

Anywho, these 3D Tetris cushions come in 5 differently colored pieces in different shapes. They are very soft and huggable and guess what? You can also rotate them! 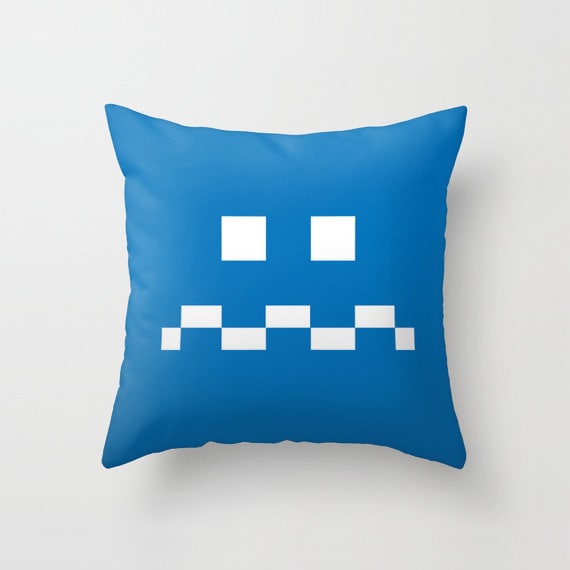 Isn't Pac-Man grand? I remember playing that game and when I figured out how the ghosts move, I can play the game for a long time! (Just remember, the red follows, the blue ambushes and the other two are stupid.) But I digress. This ghost pillow shows the face of the ghost (any, they all look the same) when you are a power pellet and are chasing them. Can't you see the fear in those pixellated eyes? But seriously, it is just too cute! 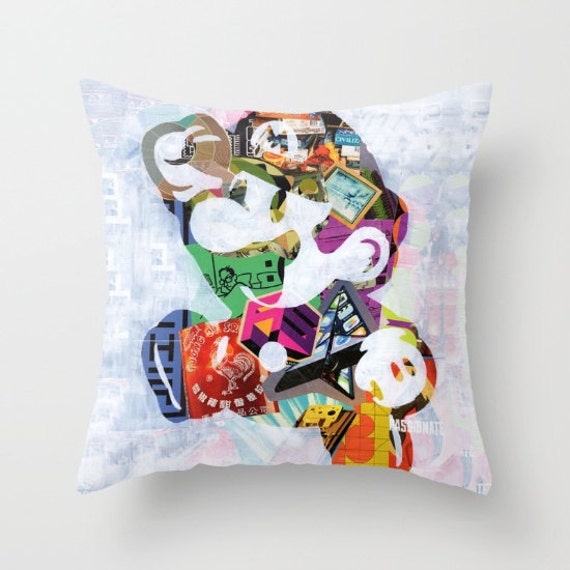 The most successful video game franchise, Super Mario started looking like this: pixellated and awesome. Why not put a bit of 8-bit into your video gaming den by adding a few of these gaming pillows into your couch? This SMB pillow shows the picture of Mario standing up at the other side. Just too cool! 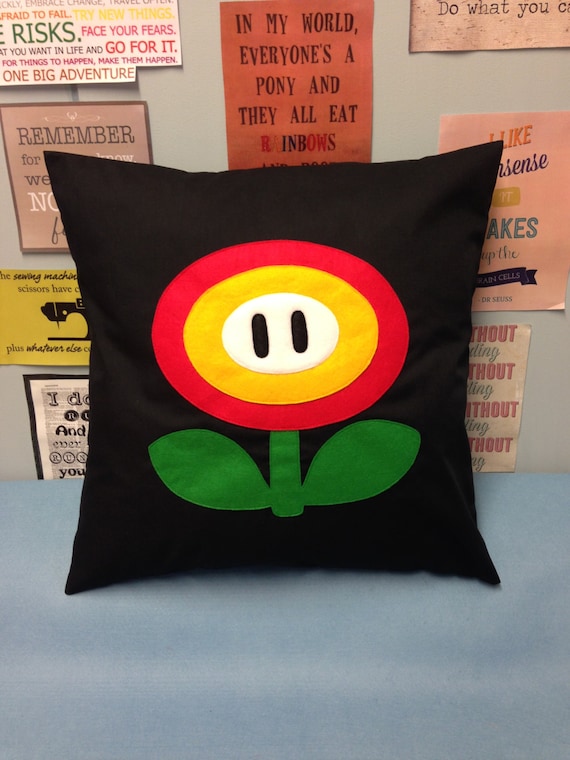 This is just too awesome! I cannot help but to include another Super Mario Bros pillow. This pillow shows a very minimalist representation of the fire flower in the SMB franchise. It is simple but too beautiful.

Oh look! They are also making the other powerups!

Maybe you can buy all four of them? I can imagine these gamer throw pillows will look nice and will form a Super Mario Bros. themed sofa. 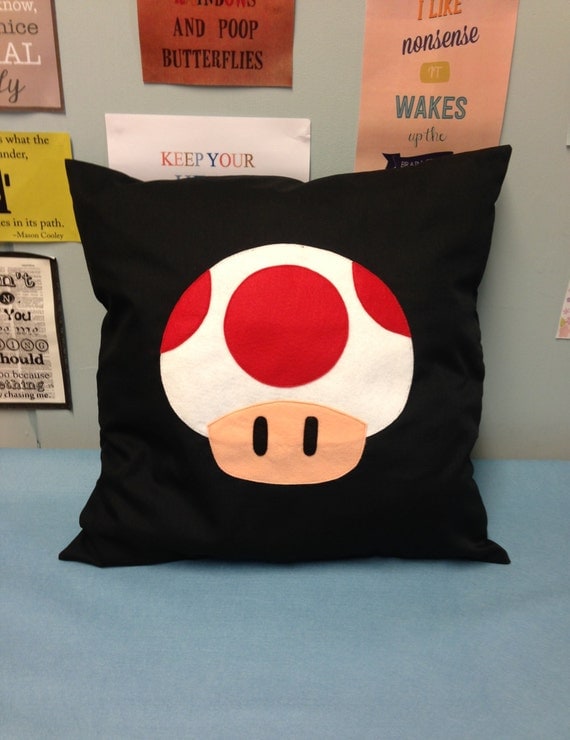 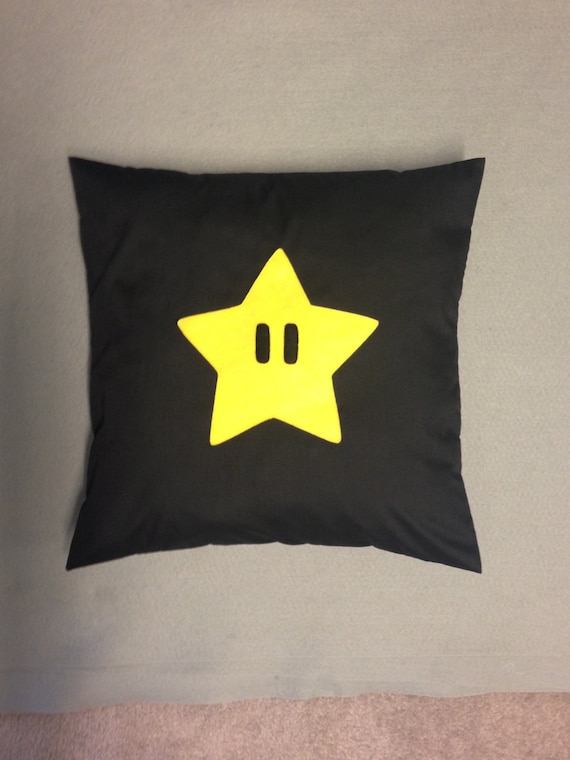 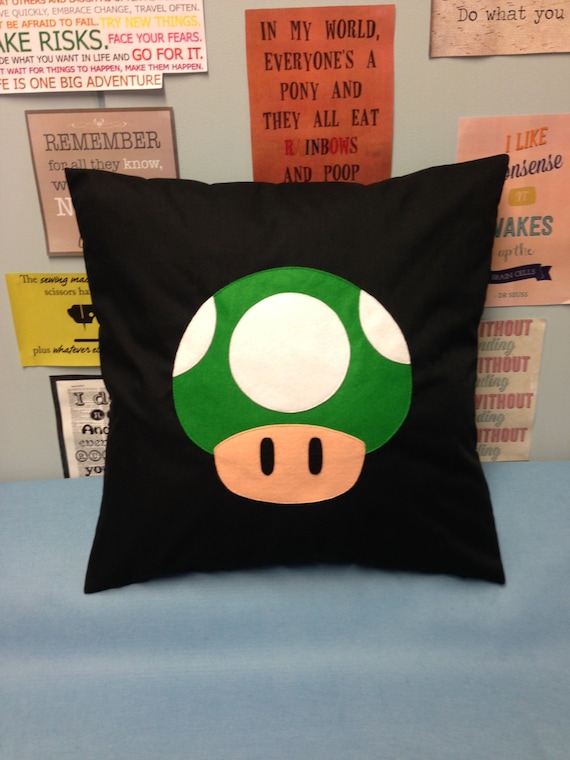 It is Vault Boy approved! This Nuka Cola advertisement pillow is perfect for the geek who plays Fallout. If you do not know this yet, Nuka Cola is the Fallout Universe's Coke, which the bottle caps are used as currency. A fallout fan will go nuts when he sees this new pillow of his. This will be his favorite gaming pillow while playing Fallout 4. Just remember, too much soft drink can cause diabetes! 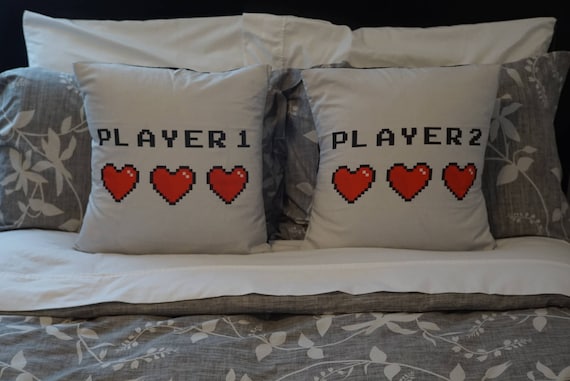 Well, who would have thunk!? This super geeky couple's pillow has video game labels on them! This makes a perfect wedding gift to a couple who loves video games. (Common hobbies cultivate romance, remember kids!)

Or, you can give it as a gift to your lover who likes video games (even if you don't). He will love the reference and the pixellated print of these pillows. Also, aren't all couples players of a game in bed? *wink wink, nudge nudge* 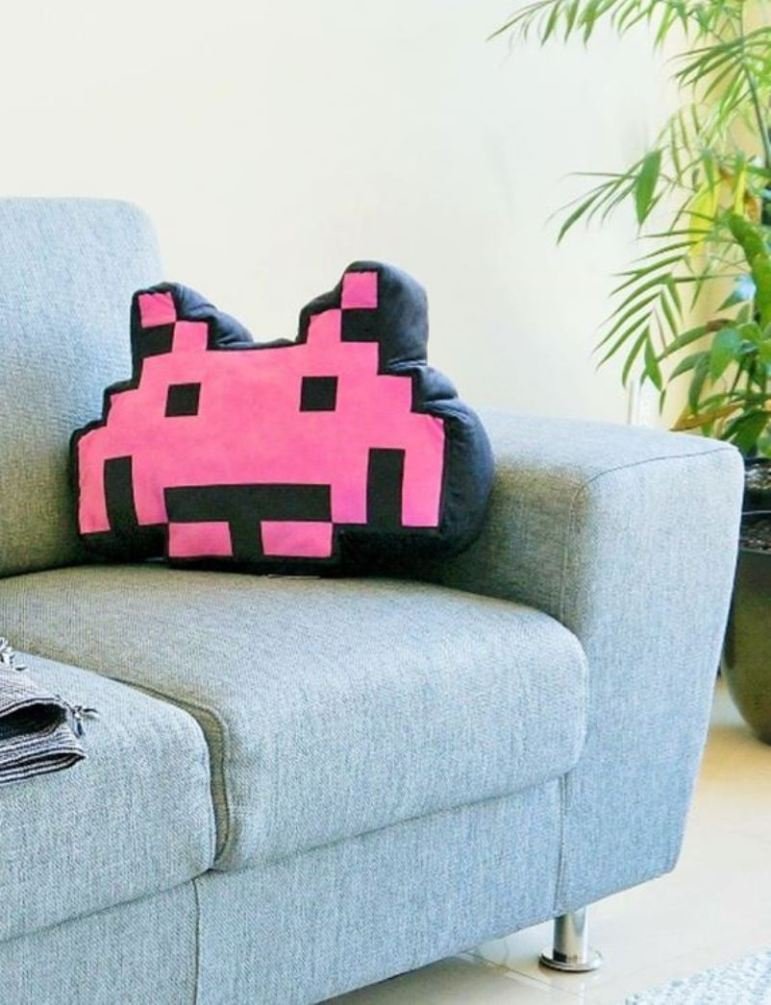 This officially licensed Space Invaders alien plush is one of the cutest I have ever seen! If your video gaming geek had spent his childhood sleeping late because of playing Space Invaders on his Atari, then he will love this! The pink crab alien is awesomely soft and cuddly and can be used as a headrest while playing some video games at the den! It is quite sturdy and can withstand a lot of hugs, head and foot rests and throwing. This legendary thing will look great as a video gaming pillow for bed. 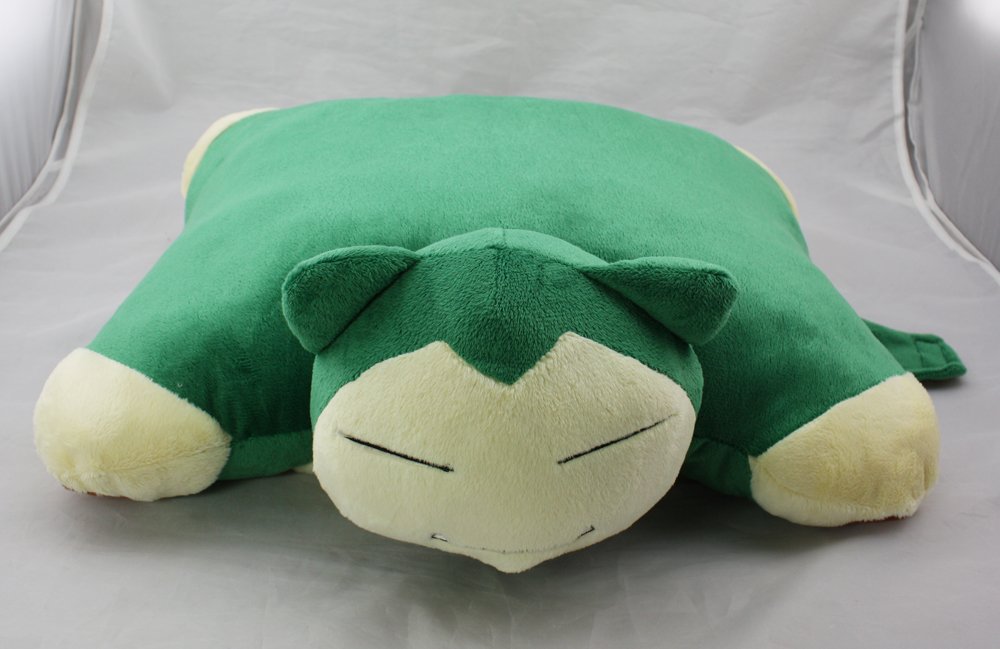 If you played Pokemon, you have experienced getting your progress blocked by a sleeping Snorlax. These powerful Pokemon are as lazy as they can get, but are ultra powerful. Now, you can also get a pet pillow Snorlax like this. It acts like a flat pillow you can rest your head on and you can also connect the sides together to make a cute Snorlax plush you can play with! This is a nice geeky pillow a Pokemon fan can fest their faces at after a long and tiring day. Snorlax, I choose you! 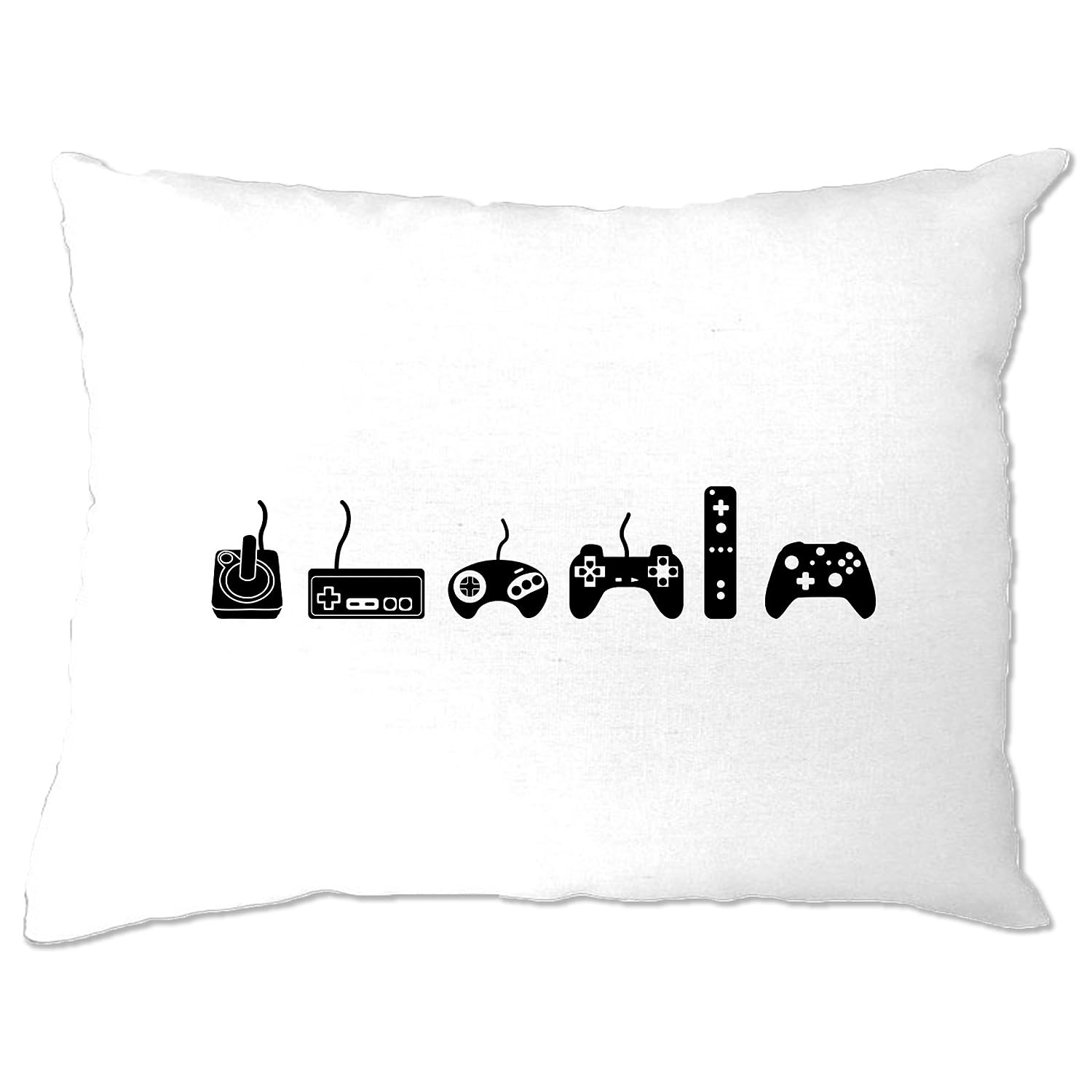 For those who were children in the 80's to early 90's, the cool kids played NES. If you were one of those kids, then you can relive your 8-bit gaming life with this super cute NES controller pillow! This pillow will be a perfect addition to your gaming den. I don't know about you guys, but i love minimalist designs that look original. Something like this "Play With Me" throw pillow. If you have no idea what your video game plays (or you cannot find a corresponding pillow for their game) this pillow is perfect. It looks nice, it is geeky and it even has a Playstation controller icon on it!

Are You Looking for More Video Game Gifts?

Aside form these gaming pillows, you can also check out these bedroom video game collectibles.

You can also check out out Zelda, Minecraft, Skyrim, Super Mario and Fallout gift ideas!